We are happy that Vincent Ingala is back with a new album, Personal Touch. The veteran musician will release his fourth album in 2018. Ingala released his first album, North End Soul at the tender age of 18. 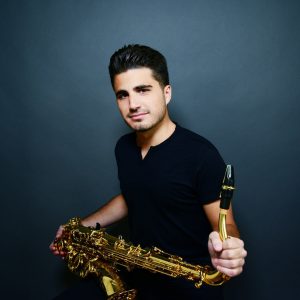 A Smooth Jazz musician at 18? You definitely do not often see that.

Ingala started off playing the drums, then the guitar. I guess the saxophone was an afterthought. Nevertheless, we are glad that the sax became his instrument of choice.

The two re-imagined classics are from Billy Ocean and Alexander O’Neal.

Heck, why don’t we just let Vincent describe the album……

The set opens with the first single and the title track, Personal Touch. If you have never heard a Vincent Ingala song, this song perfectly showcases Ingala’s style. He is really good at playing those long-winded riffs. About halfway through he totally murders that bridge, and you will immediately want to hear more of what he is offering.

Take a listen to understand what I am talking about:

My Kind Of Day is up next, and is has an old school feel to it. The bassline has a “Show and Tell” type of vibe, and you really wish the song had a vocal, because you would surely sing along. The cowbells are a nice addition, especially when the song breaks down toward the end.

The first of two remakes is next, and it is the Billy Ocean classic, Love Zone. Ocean had other tracks that charted better, but for me, this is his best song. Once you hear that distinctive bassline, you are immediately transported back to the mid-1980’s. That is surely not a bad thing.

Ingala captures the essence of the song and makes it his own. I have to say that he picks some great songs to remake. Other artists will record some of the same classic songs, but not Ingala.

If you are ready for a slow jam, then Dream Girl will fulfill that desire. It has a New Age feel, especially with the lead piano. Ingala’s musicianship is on full display here. It actually seems like the sax and piano are performing a choreographed dance. The song is four minutes long, but I could have used another two minutes.

I don’t know about you, but I like my EDM style jazz songs. I Think I’m Falling In Love (With You) is one of those tracks. It has a Chicago chill house groove, a nice simple hook, and a Roy Ayers type of vibe. This is a track to throw on as you get ready to go out on the town.

Up next is the second remake, an Alexander O’Neal classic. If You Were Here Tonight sits right in Ingala’s wheelhouse. First off, I want to give props for the song choice, AND, the performance is so smooth.

My only gripe is that I could have used another two minutes of the song. Instead of three-and-a-half minutes, it needed to be five minutes. Just my personal preference. If it feels good, you NEED to go longer.

Ingala turns on the funk with Feng Sway. If you are putting together the perfect soundtrack to drive to, this should make the cut. The guitar part is definite FIRE!

We have another track with a New Age feel, and Can’t Stop The Rain From Falling is one of the top tracks on the album. There is something about the piano and sax combo, as once again they fit so well together. The groove is really chill, but uptempo at the same time. This is a track you can play at any time and for any occasion.

When you title a track Snap Crackle Pop, it better get you up and going. No time for breakfast? Put this on and you will have a pep in your step as you get ready for work. The drums totally make this track.

The album concludes with Not Meant To Be. I actually had to check to see if Norman Brown was playing guitar here. Nope…Vincent is ripping it up, and I have to say if he wanted to do an album that featured his guitar skills, then he would have a top ten guitar album.

This track is tight, that is all I can say.

I know we are still early, but I will predict that Personal Touch will be one of the top albums of 2018. It has a little bit of everything; uptempo jams, slow songs, and excellent remake choices. This is an album that you will enjoy from beginning to end.you will be able to purchase the album and listen to it on your favorite streaming service on May 4th.