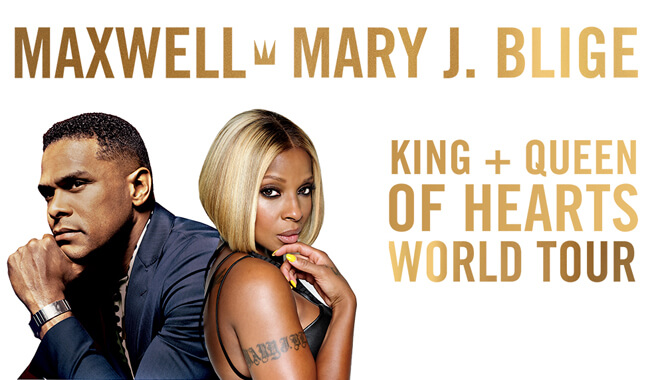 Maxwell and Mary J Blige are set to head out on the road this winter.  The Maxwell and Mary J Blige Tour, otherwise known as the King + Queen Of Hearts World Tour will kick off in Switzerland this October.  The tour will be land in the states on November 5th in Baltimore, MD.  Performances will hit most major cities through December 14th.

You know Mary J Blige, as she started as a guest vocalist on the Father MC track, I’ll Do For You.  In 1992, she released her landmark debut album What’s the 411.

The Queen of Hip Hop soul is a nine-time Grammy Award winner.  She has sold more than 50 million albums worldwide.

Maxwell is the other half of this world tour.  We all know about the Urban Hang Suite in 1996.  Maxwell is at the top of the food chain when it comes to the Neo-Soul singers.

Opening the show for the tour is newcomer Ro James.  His song, Permission, has been blazing up the charts in August and September.  He will be performing select tracks from his self-titled debut release.

This is an exciting lineup that you will not want to miss!