Listen To “Do Whatever” By The Suffers

We have a mantra here at TheJazzWorld. If we like it, we post it! Now, we LIKE this one. This is a track called Do Whatever, and it is by a group called The Suffers.

Here is the official press release:

There is a contagious and combustible energy every time the eight-piece wonder-band The Suffers steps on the scene. NPR’s Bob Boilen attributes the band’s allure to their “Soul, straight from horn to heart.” He adds, “This band is on fire when it’s in front of an audience…but the intensity of their shows are also captured in the studio.” Following The Suffers’ electrifying late night TV debut on Letterman in 2015, David Letterman exclaimed, “If you can’t do this, get out of the business!” There is something undeniable about The Suffers (whose name is a reference to the 1978 Jamaican film Rockers starring Leroy “Horsemouth” Wallace, Jacob Miller and Burning Spear, among others), that instantly hits home with their audiences. “We make music for all people,” says lead vocalist Kam Franklin. “At this point, we’ve played all over the world and one thing is certain – if the music is good, the people will enjoy it.” Since 2011, the H-Town heroes have been on a steady grind and have no plans of stopping. It seems the secret to their success is simple. Keyboardist Patrick Kelly confides, “There is a universal groove in the music that we play,” while bass guitarist Adam Castaneda adds, “I don’t think any of us are trying to impress anyone with our technical abilities, we just want to make them dance.” 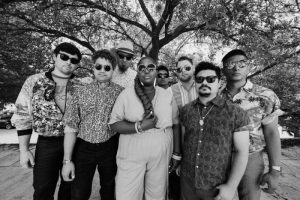 July 13, 2018, Shanachie Entertainment will release The Suffers’ highly anticipated label debut Everything Here.Guitarist Kevin Bernier says, “Everything Here, as a whole, explores the many aspects of who we are as people through songs. We’ve had crushes on people, we’ve had our hearts broken, and we’ve moved through all the difficult times so that we can experience the joyful moments.”  The Suffers have got everything you need and there’s no need to look further – a heaping dose of soul, a dash of reggae, a splash of jazz, a pinch of salsa, a hint of rock ‘n’ roll and a dollop of hip hop and funk – and that is just a few ingredients simmering inside their magical Gulf Coast soul. Percussionist Jose Luna says, “The glue that holds us together is our experience. We have all played with so many bands and musicians through the years that we have learned how not to step on each others toes.”  The Suffers however will get your feet moving on Everything Here, a riveting collection of 15 originals that shows mad love for Houston (there are even cameos from Houston rappers Paul Wall and Bun B), explores the many sides of love, celebrates the virtues of individuality, reminds us of the destruction of Harvey and resilience of the human spirit  and declares love for their mothers. All of these themes coalesce into one soulful soundtrack.   The band co-produced the album with John Allen Stephens and Zeke Listenbee co-produced on several tracks.   Trombonist Michael Razo explains, “One of our goals was to have the songs on the album flow or tie into each other. Like creating an album where you just press play and let it go without having to skip to the next song.”  The album’s new single is “Do Whatever,” which opens with tight and soul-stirring horns, thumping bass lines and Kam laying down the law singing “Full on disclosure, I’m not here for exposure. I came to have a good time so let me shine….Do whatever feels right all night, alright, alright!”

“The Suffers are a contemporary version of the great R&B/funk bands of 70s and 80s….Rufus, Earth, Wind & Fire, Kool & The Gang, etc. with a powerful lead vocalist in Kam Franklin and spot-on musicianship that is all too rare these days,” says Shanachie Entertainment General Manager, Randall Grass. “They’ve done a great job of building a base on their own and we at Shanachie are looking forward to taking them to the next level.”

The Suffers drive coupled with their can’t lose attitude and serious chops have taken them from their beloved Houston to the world stage (they are the first band to break nationally out of Houston in a long time). “We’re a testament to teamwork and camaraderie resulting in things working out even when the odds are against a positive outcome,” says drummer Nick Zamora. “The wonderful thing about music is that it is ultimate universal communication,” reflects trumpeter Jon Durbin.  The Suffers have played sold out shows in Japan and Latin America, turned out audiences at the Newport Folk Festival and Afropunk Festival and made believers of just about anyone who has experienced their live shows. With the release of Everything Here, The Suffers are bound to further endear die-hard fans and make believers of new ones. “I’m most proud that we are still here going at it,” concludes Kam Franklin. “All the travels, new friends, and fans we’ve gained along the way are just an added bonus to a much bigger dream.”
TRACK LISTING FOR EVERYTHING HERE
01. Intro (A Headnod to Houston) feat. Paul Wall
02. I Think I Love You
03. Do Whatever
04. The One About Sace
05. All I Want To Do
06. Sure To Remain
07. Charlotte Intermission feat. Paul Wall
08. After The Storm feat. Lyle Divinsky
09. What You Said
10. A Word From Our Mammas
11. Mammas
12. Bernard’s Interlude feat. Bun B
13. Everything Here
14. You Only Call
15. Won’t Be Here Tomorrow