[/vc_column_text][/vc_column][/vc_row][vc_row][vc_column][vc_column_text]Kristin Chenoweth has emerged as one of today’s most versatile and charismatic performers. An accomplished actress, commanding singer and uniquely charismatic personality, she’s conquered Broadway, film, television and the recording medium, releasing a series of acclaimed albums that demonstrate the depth and breadth of Chenoweth’s musical passions.

Chenoweth’s seventh album, and third Concord Records release, is For the Girls, one of her most personal and compelling projects to date. The album is a tribute to some of the great singers who have influenced her, with Chenoweth’s personally charged interpretations of 12 classic songs identified with such iconic artists as Barbra Streisand (“The Way We Were”), Eva Cassidy (“It Doesn’t Matter Anymore”), Dinah Washington (“What a Diff’rence A Day Made”), Doris Day (“When I Fall In Love”), Patsy Cline (“Crazy”), Judy Garland (“The Man That Got Away”), Carole King (“Will You Love Me Tomorrow”), Eydie Gorme (“I Wanna Be Around”) and Linda Ronstadt (“Desperado”).[/vc_column_text][/vc_column][/vc_row][vc_row][vc_column][vc_video link=”https://youtu.be/3cfMBmIOjLc” el_width=”70″ align=”center”][/vc_column][/vc_row][vc_row][vc_column][vc_column_text]”I really wanted to pay homage to all the women singers who have influenced me over the years,” Chenoweth explains. “I wanted to make something that men could also enjoy, but this is by the girls and for the girls. These songs have all stood the test of time, and most of them are songs that I grew up listening to. It was a little intimidating, because people like Judy, Barbra and Dolly are the people who made me want to be a singer in the first place. I wanted to pay homage to these women and do them proud, but I also wanted to put my own stamp on it. And I think I was able to do that.” 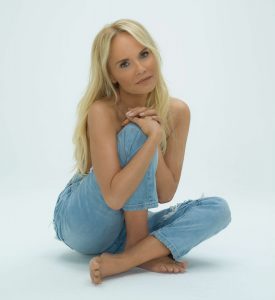 “Sometimes it felt impossible,” she continues, “because there were about 45,000 songs I wanted to record, and it took me a year and a half to narrow it down for the album. Some of the songs were obvious choices, but others were not. I also tried to find a story arc for the album through the songs, which I was able to do with the help of my producer, Steve Tyrell.”

On several tracks, Chenoweth is joined by some high-powered guest vocalists, including Dolly Parton, who lends her voice to her own composition “I Will Always Love You”; Ariana Grande, who’s featured on a pointed reading of Lesley Gore’s feminist pop anthem “You Don’t Own Me”; and Jennifer Hudson and Reba McEntire, who trade vocals with Chenoweth on “I’m A Woman,” originally popularized by Peggy Lee.

“These are some of my favorite singers in the world,” Chenoweth asserts. “‘I Will Always Love You’ is a song I’ve loved since I was a child. I used to think, ‘One day I’m going to sing that song.’ Little did I know that I’d get to sing it with the queen herself.”

Chenoweth credits veteran producer/performer Steve Tyrell, a key collaborator who also produced her acclaimed 2016 release The Art of Elegance. According to Chenoweth, Tyrell’s experience and insight made him an ideal collaborator.

“Steve and I are a match made in heaven,” Chenoweth states. “Not only is he an incredible singer and performer in his own right, he has a wealth of knowledge of all music. He has a fantastic ear and kept reminding me, ‘KC, you don’t have to be perfect the first time!”

In addition to numerous other TV, film and stage projects, Chenoweth was featured in 34 episodes of NBC’s The West Wing, was a guest judge on American Idol and Project Runway, and has recorded four studio albums.  In 2014, Chenoweth released Coming Home, a live album, DVD and PBS special recorded at a historic concert in her hometown of Broken Arrow, Oklahoma, followed by the celebrated studio effort The Art of Elegance. Among her many upcoming projects are a pair of holiday-themed films, A Christmas Song and Holidate.

Her multimedia successes notwithstanding, Chenoweth retains her enthusiasm for the recording process, regarding her album projects as a vehicle for creativity and expression.[/vc_column_text][/vc_column][/vc_row]