James Rouse & The Buttered Biscuits Give It A Chance 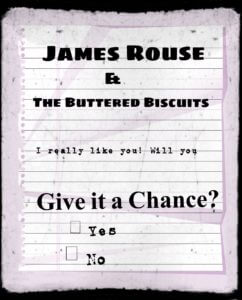 It is no secret that I believe that the soul is lacking in most of the jams that are out in 2017.  Our friends at Purpose Music Group has some new material for your listening pleasure.

James Rouse & The Buttered Biscuits have just dropped the new single, and it is called Give It A Chance.

James is a veteran in the biz, as he has played the drums for a who’s who in R&B.  They include:  Stevie Wonder, Pharrell Williams, Usher , The Isley Brothers, Nile Rodgers and Chic, Alicia Keys, Ray Chew  and most recently Vivian Green, Syleena Johnson and Lauryn Hill.

James also played drums and did some programming on the just released remake singe by Ms Lauryn Hill entitled “Rebel/I Find It Hard to Say”.

James Rouse & The Buttered Biscuits Give It A Chance