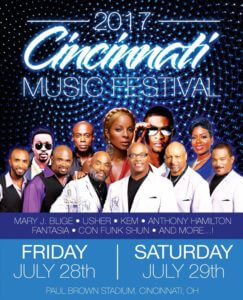 The Cincinnati Music Festival has been going on since 1962.  It was then called Ohio Valley Jazz Festival, where it was an all-jazz affair.  It has since evolved into a two-day festival that features some of the biggest names and upcoming artists on the scene.  This year will be no different.

The 2017 edition will feature a nice mix of old-school and current R&B.  Mary J Blige will headline the Friday night show, and Usher will headline Saturday night’s event.  One of my favorite funk bands, ConFunkShun will be performing on night two.  The band was formed in Vallejo (San Francisco Bay Area) and with hits like Too Tight, Ffun, and Ms. Got The Body, they had that funk backbone.  They also had the slow jams – Baby I’m Hooked and I’m Leaving Baby showcased their versatility.

The Bay Area will also be represented on Friday, as En Vogue will be harmonizing for you.  Fun Fact:  Their producers, Foster and McElroy were members of the group Club Nouveau.  Remember them??

Here is the lineup for each day:

On July 27th, there will be a pre-party called Party With A Purpose.  It will be hosted by Doug E. Fresh, and it will feature Kid Capri and Rob Base.  For this event, a $5 donation from each ticket will go to the Cincinnati USA Convention and Visitor Bureau Hospitality Initiative.

Tickets for Party With A Purpose – July 27th