If you have some availability on March 5th, 2017, you might want to consider taking a jaunt to London. Chris Standring Live In London recording a live session performance.  He will have a special guest vocalist, and it is one of my favorite performers.  English singer Mica Paris.  I remember her debut album, So Good.  It has several nice cuts on there.  My One Temptation, Like Dreamer’s Do, Don’t give Me Up and the remakes So Good and Where is the Love with Will Downing.  The album 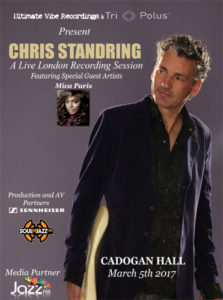 was released in 1988, and since then, Mica has released six other albums.

Such a unique voice.

Of course we dig Chris because his music is based in the Funk.  His latest album, Ten is doing really well, and since he has been releasing music since 1996, he will have a lot of material to choose from when he hits the stage at Cadogan Hall in London.

An interesting aspect of the show is that the audience members will be able to experience the recording session live with Sennheiser headphones.  I really like that idea.

There are only 220 VIP tickets available, so if you are thinking about making a trip to London, this will be an added bonus!

If you purchase passes before December 4th, you can use the promo code CSLIVE10 to get 10% off the ticket prices.

Here is the direct link: