Brian Owens and The Deacons Of Soul New Album 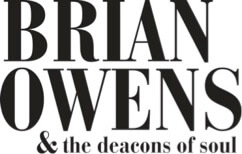 In a time where the Grammy Awards showcases manufactured popular music that leaves you searching for it’s soul, there are artists out there that have more than enough soul to share with others.

Case in point:  Brian Owens and The Deacons Of Soul.  Their latest release (February 24th) is titled Soul Of Ferguson, and if you are a fan of the Motown and Staxx grooves, this album should be a staple in your playlist.  The debut single, For You, features Michael McDonald…..yes that Michael McDonald, and it is the type of upbeat jam that will make you wonder why we don’t have more of this feel good music out there.

Brian Owens either wrote or c0-wrote all of the songs on the release, and when you hear the music, thoughts of Sam Cooke, Curtis Mayfield and Marvin Gaye come to mind.

I do not know for sure, but I am almost positive that they used vintage instruments for the recordings, because this would be the only way to get those specific sounds.  Pretty Fine Thing is an example of this.  Between the drum sounds and those laid back strings, you get the feeling you snuck into Motown studios in Detroit to get a glimpse of the recording process.

Other standouts include Beautiful Day, a track that has a uptempo beat, but the groove is smooth enough that it almost takes on a slow jam vibe…..That is until the bridge toward the middle of the track.

When A Grown Man Cries is a track that will bring back memories of a childhood where you may see the father figure in your life, and wonder why you never saw him cry. “When a grown man cries, he may not even have tears. But that doesn’t mean he’s not crying.”

There are eight total tracks plus an outro, and I must say that if you give it a listen, you will not stop at just one song!